Britney Spears is all of 27 today. Since she had a fairly good year, I'm wondering if someone helped her by smacking that child and telling her to put her panties back on.

The Marquis must have been a panic at parties.


The Monroe Doctrine was proclaimed on this day in 1823. The doctrine set forth the principle that meddling European bastards should keep their meddling goddam hands out of the Americas.

It should not be confused with the Marilyn Monroe Doctrine, which stated that fondling European bastards should keep their fondling goddamn hands out of—


December 2, 1939 -
LaGuardia Airport opens for business on this date.

Some of the first scheduled arrivals should just about be getting in. 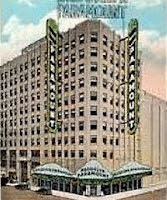 Metesky was finally arrested in January of 1957. After undergoing extensive psychiatric examinations, for the time, he was found to be legally insane and incompetent to stand trial.

Although recognized as a great innovator of television, I guess he might have had second thoughts about that Lucky Strike sponsorship of the "I Love Lucy" show.