Remember to switch to a smart Fedora

In the early 20th Century, tradition held that a man switch from straw hats to felt ones on September 15th. If he wore “the taboo headgear” after that date, hooligans were free to smash it to bits.

In 1922, a group of men and boy, 1,000 strong from Five Points sparked a bizarre riot that shook New York City from the Battery to the Bronx, as they prowled the city, beating men, who refused to remove their straw hats.

The Lone Ranger, the masked hero rode onto the fledgling ABC network for the first time on this date

Clayton Moore sat out 52 episodes. The studio claimed it was a pay dispute, but Moore insisted up until his death that it was over creative differences. John Hart was hired to replace him, but the change did not sit well with audiences. When George W. Trendle sold the rights for the series to Jack Wrather in 1954, Wrather immediately rehired Moore.

The Big Valley premiered on this date.

The series was canceled despite its popularity, because the networks were phasing out westerns in favor of more modern TV shows.

Green Acres premiered on this date.

Arnold the Piggy was the only cast member to win an award for a performance in a sitcom. He won the coveted "Patsy" Award in 1967, given to the best performance by an animal.

The Robinson Family gets Lost in Space for the first time on CBS-TV on this date.

CBS Chairman William Paley, who prided himself on the fact that CBS produced quality, thoughtful programming, hated the show and couldn't understand why it was so popular. He instructed his executives to cancel it the minute its ratings dipped.


And last, but not least, the first American television drama to feature an African-American actor in a lead role, I Spy, starring Bill Cosby and Roger Culp, premiered on NBC-TV on this date.

The show was the first American dramatic TV series to feature a black actor in a lead role. The show was not aired on certain NBC affiliates in the south due to the fact that it dared to show an African-American actor (Bill Cosby) on the same level as a white actor (Robert Culp).


September 15, 1967 -
The Star Trek episode Amok Time aired on this date.  In the episode, Kirk and Spock are pitted in a fight to the death against each other by Spock’s wife-to-be when Spock suffers his first pon farr (the Vulcan time of mating).

The episode is the first in which Spock uses either the phrase “live long and prosper” and makes the “Vulcan salute” gesture for the first time.

The first episode of the Columbo series premiered on NBC-TV on this date.

The very first episode, was directed by Steven Spielberg and written by Steven Bochco. Spielberg was never again involved with the series, through Bochco wrote several other episodes.

Series co-creator Terry Louise Fisher, former deputy district attorney for Los Angeles County, former entertainment lawyer for 20th Century Fox, and producer-writer for Cagney & Lacey, composed a form letter she was thinking of sending to lawyers who complained about the show: "Dear So-and-so: If I were a good lawyer, I'd still be practicing law. Instead, I'm stuck in Hollywood, making 10 times as much money. I hope you are as conscientious about your clients as you are about our show. Thank for your writing."

Outraged by the rents, discouraged by the lack of parking and homesick for bubble and squeak and spotted dick, however, they left shortly afterwards, leaving only drunken journalists behind.


September 15, 1830 -
British MP William Huskisson was chatting amiably with the Duke of Wellington at the grand opening of the Liverpool & Manchester Railway, when all at once the right honorable gentleman distinguished himself for posterity by becoming the first human being in history to be run over by a train.

Apparently, Mr. Huskisson's number was up.

(The Duke of Wellington, on the other hand, is remembered for his Beef.)


September 15, 1864 -
Thirty-four years later, on this date, another hardy British soul, the explorer John Speke, distinguished himself by becoming the first European to see Africa's Lake Victoria, and then accidentally shooting and killing himself while hunting partridges.

(conveniently, the day before he was to debate his finding with his famous exploration partner, Richard  Burton - no, not that Richard Burton, the other one, the famous self circumciser, and translator of 1001 Arabian Nights and the Kama Sutra.) P.T. Barnum's prize elephant Jumbo was struck dead by a freight train in St. Thomas, Ontario, Canada. It took 150 men to haul the carcass up an embankment, from whence it is taken to a taxidermist.

The stuffed Jumbo became a featured attraction in Barnum's circus. 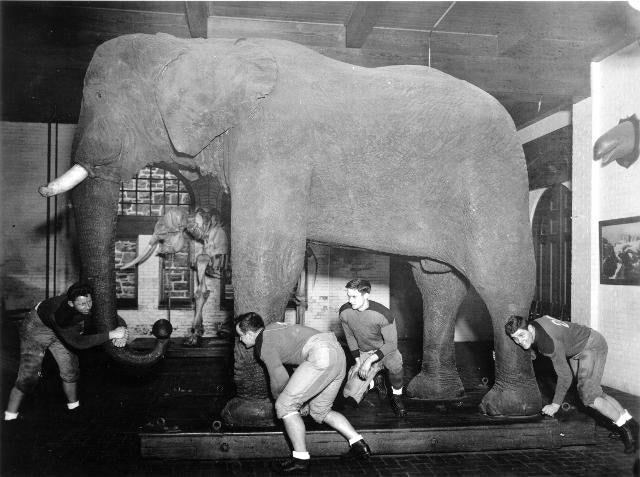 
September 15, 1890 -
It's the birthday of Agatha Christie (Vanessa Redgrave), born in Devon, England. She was a Red Cross nurse during World War I. She started reading detective novels because she found they took her mind off her troubles (her husband couldn't help sleeping with other women) and soon after, started writing her own.

Her big breakthrough book was her novel The Murder of Roger Ackroyd, which came out in 1926. It was the same year in which Christie had a fight with her husband, fled her own home, and was missing for ten days. There was a nationwide search. It was on the front pages of all the papers. And when she finally turned up, she was famous and all of her books were best-sellers.


September 15, 1928 -
Scottish bacteriologist and noted slob Alexander Fleming accidentally discovered that the mold penicillin had an antibiotic effect, on this date. Had he cleaned his laboratory every night and put all his things away like a good little boy, he never would have discovered penicillin, and half of us would be dead right now.

As I am deathly allergic to penicillin, his discovery has done little for me but I pass this along to you all.


September 15, 1954 -
In front of thousands of spectating New Yorkers at 51st and Lexington, Marilyn Monroe performed the now-famous skirt blowing scene during filming for The Seven Year Itch. The event basically boils down to a publicity stunt, as the whole thing was reshot later on a Hollywood soundstage.

Unfortunately, this event is the final straw in the Monroe - Dimaggio marriage and it soon comes undone.