Remember to clean all the wax off the sideboard.

It's the Eighth, and last, night of Hanukkah. For your own health, consume bran muffins for the rest of the year.

(Early depictions show Lucy offering her eyes on a platter; she is now the patron saint of Sicily and of opticians.)

Because her extreme beauty attracted too many admirers, Lucy gouged her own eyes out (she had body issues). Miraculously they grew back. After refusing to marry, the Romans forced her to become a whore. She wasn't particularly thrilled with that choice, so she went for door number two and her Roman guards stabbed her to death but not before gouging out her eyes, again.


December 13, 1975 -
Richard Pryor hosted NBC-TV's Saturday Night Live on this date.  Fearing Pryor would say things that were too offensive for television at the time, the show was placed on seven-second delay for the very first time

As mentioned in the opening sketch, Pryor requested that Garrett Morris say "Live from New York, it's Saturday Night!" instead of Chevy Chase. Morris' was the only cast member besides Chase to say it during the entire season.


Today in History:
December 13, 1577 -
Sir Francis Drake set out on a three year (and not three hour) long journey around the world, on this date. He had started his career as a sailor in the slave trading business, but after some run-ins with the Spanish, he decided to devote his life to taking vengeance on the Spanish by disrupting their trade routes.


December 13, 1809 -
The first successful abdominal surgery procedure was performed in the US on this date.  Dr. Ephraim McDowell removed a 22 pound (about 10 kg) tumor from the ovary of Jane Todd Crawford. Crawford had previously been misdiagnosed as being pregnant with twins. The surgery was performed without anesthetic or antiseptics, but Crawford made a complete and quick recovery. (Now that you've gotten up off the floor, clutching you belly,) McDowell was called the "father of the ovariotomy," after that and went on to perform similar surgeries, including a hernia repair for President James Polk.


December 13, 1928 -
The Clip-on tie was invented on this date. Productivity soars as time lost in tying knots is made up and accidental strangulation rates drop as fewer workers ties are caught in the gears.

Legend has it that it was a mortician who had too hard of a time tying ties onto his corpses.

Little know fact - the term, Dork, was also coined on this date.

While commuting to his job as a sportswriter, he decided to drive past the office and stop at a nearby volcano in Auvergne. During his stop, Vorilhon saw the flashing red light of a space ship, which opened its hatch to reveal a green alien with longish dark hair. Once aboard the spaceship, he said he was entertained by voluptuous female robots and learned that the first human beings were created by aliens called Elohim, who cloned themselves.

Vorilhon said that he was instructed to take the name Rael and spread the news that humans were placed on Earth by extraterrestrials who had engineered our DNA. In 1997 Rael founded Clonaid, a company dedicated to cloning people. In 2013 the Raelian movement numbered about 90,000 members world-wide.

The French, they are a funny race.


December 13, 2003 -
Iraqi dictator Saddam Hussein’s nine-month long run from the US military finally came to an end when he was discovered hiding in a hole just nine miles away from his hometown of Tikri, five months after his sons Uday and Kusay were killed in a raid in Mosul.

Following his capture, Saddam was put in Iraqi custody and charged with the deaths of nine villagers, the razing of farmlands, the wrongful arrest of almost 400 Dujail residents and the torture of women and children. He was sentenced to death.

It's all the damn man in the can's fault.

Christmas trees are known to have been popular in Germany as far back as the sixteenth century. In England, they became popular after Queen Victoria's husband Albert, who came from Germany, made a tree part of the celebrations at Windsor Castle.

In the United States, the earliest known mention of a Christmas tree is in the diary of a German who settled in Pennsylvania.

Don't even ask about the legacy of Prince Albert and tight trousers.

Before you go, remember to get your Christmas cards out soon. You no longer have time to avoid the rush - tomorrow is the busiest day of the year at the post office.

The more cards you send, the more solvent the USPS remains. 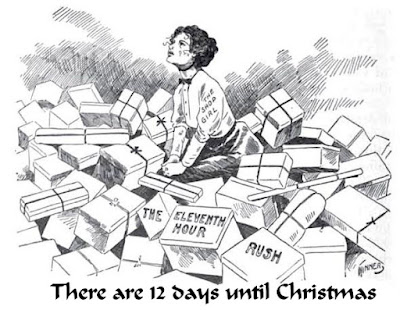