No winter lasts forever; no spring skips its turn.

In the northern hemisphere, today (actually at 11:49 P.M. last night, in NYC) is the Winter Solstice, the shortest day of the year and the longest night.

It's officially the first day of Winter and one of the oldest known holidays in human history.

Anthropologists believe that solstice celebrations go back at least 30,000 years, before humans even began farming on a large scale. The stone circles of Stonehenge were arranged to receive the first rays of midwinter sun.

It is therefore a good time to do things you wouldn't want the sun to hear about. The Pagans, for example, wisely celebrate their Yule holiday on the Winter Solstice.

Ancient peoples believed that because daylight was waning, it might go away forever, so they lit huge bonfires to tempt the sun to come back. The tradition of decorating our houses and our trees with lights at this time of year is passed down from those ancient bonfires.

In Ancient Rome, the winter solstice was celebrated with the festival of Saturnalia,

during which all business transactions and even war were suspended, and slaves were waited upon by their masters.

Hey, Get Naked, Paint Yourself Blue and Dance around the Fir Tree. It's party time!!!


The folks from Burger Fiction have put together a mashup of the man of the season from various films:

Perhaps you can help the authorities and identify the individual?


December 22, 1932 -
Universal Pictures released the horror film The Mummy, directed by Karl Freund and starring Boris Karloff on this date.


December 22, 1944 -
The Mummy's Curse the follow-up film to The Mummy's Ghost was released by Universal Pictures on this date.

According to actress Virginia Christine, when Lon Chaney Jr. carried her, she was attached to a harness that went around his neck and her waist. The actress has stated that Chaney was drunk through most of the picture. In the scenes whee he carries her up the steep, crooked, worn steps of the shrine, "he is absolutely stoned" and was "weaving , going side-to-side on these uneven steps." Because they were attached, Christine was concerned what would happen if the inebriated, husky Chaney fell. She was very relieved when the director stopped the shoot and replaced Chaney with a stand-in.

RKO had the rights to Joan of Arc since 1935, when it was announced to star Katharine Hepburn. Hepburn made some Technicolor tests, but the project was eventually shelved due to the multiple box office failures of Hepburn's last few pictures.

According to Mercedes McCambridge, she would ride to the London set of this film in the same car as Montgomery Clift. Clift always insisted that the driver stop by Wormwood Scrubs prison, so that Clift could scream out the car window at the convicts behind bars.

In the scene where Julie Christie slaps Rod Steiger, Steiger slaps her back. Steiger slapping her back was not in the script or discussed during filming, Steiger did it only during filming and the stunned reaction of Christie was genuine. When Rod Steiger kisses Julie Christie for the first time, her struggling and surprise is genuine because Steiger deliberately French kissed her, sticking his tongue into her mouth.


December 22, 1975 -
A beautiful study of love and madness (and the razor's edge between them), L'histoire d'Adele H, opened in the US on this date.

In 1988, Isabelle Adjani played the title role in Camille Claudel, playing another historical character who suffered from schizophrenia. A major scene in that movie depicts the announcement of the death of Victor Hugo, Adele Hugo's father.


Today in History:
December 22, 1879 -
It's Stalin's birthday (again)! Hey, when you're a dictator, you get to celebrate your birthday on more than one day. Unfortunately, the proper way to celebrate - oppress, torture and murder millions of your fellow country men - is frowned upon. So smack someone upside the head for no reason.


December 22, 1937 -
The center tube of the Lincoln Tunnel was opened to traffic today, charging $0.50 per passenger car.

Some of those cars are still trying to get through the tunnel.


December 22, 1940 -
Strange death of the day - Author Nathanael West and his wife, Eileen McKenney, died in an auto accident on this date.

http://www.richardlevesqueauthor.com/wp-content/uploads/2014/09/westdeath.jpg
Distraught over hearing of his friend's F. Scott Fitzgerald's death (who passed away a few days earlier of a massive heart attack,) he crashed his car after ignoring a stop sign.


December 22, 1955 -
The corpse of Evita Peron was stolen by anti-Peronistas on this date.  For 26 years, her corpse makes a world-wind turn before it's returned for burial in Buenos Aires. 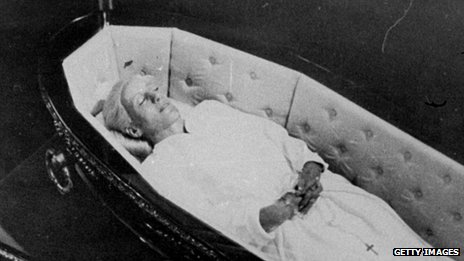 30 years later (to the day), Madonna's Like a Virgin single goes #1 for weeks.

Make of the coincidence what you will.


December 22, 1984 -
Bernhard Goetz shot four teenage boys on the NYC subway after one of them asks him for money.

Again, this practice is frowned upon, so instead, smack someone upside the head.


December 22, 2001 -
Richard Reid attempted to blow up an American Airlines transatlantic flight by igniting a plastic explosive concealed in his shoe. Other passengers beat the living daylights out of him.

They knew - they smacked him upside the head. 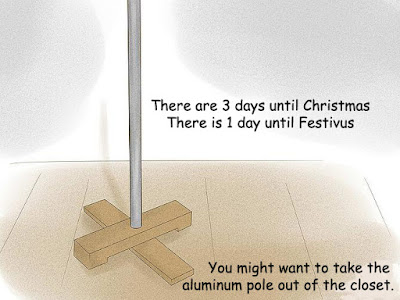