The General Accounting is done today

Where you naughty or nice?


While your wrapping your gifts, here's a Christmas Jukebox to put you in that holiday mood.


The film was shot in eight weeks, and required no retakes. During the scene where James Stewart hiccups when drunk, you can see Cary Grant looking down and grinning. Since the hiccup wasn't scripted, Grant was on the verge of breaking out laughing and had to compose himself quickly. James Stewart thought of hiccuping in the drunk scene himself, without telling Cary Grant. When he began hiccuping, Grant turned to Stewart saying, "Excuse me." The scene required only one take.


December 24, 1951 -
Gian Carlo Menotti's Amahl and the Night Visitors became a Christmas classic on this date.

The one surviving kinescope of this first production was thought to have been lost forever, accidentally destroyed by someone at NBC after it had been screened for an executive, but another copy was discovered at the Museum of Radio and Television, in New York.

The episode was network television's first half-hour color film. It was the only color show of the series. Those of you with very sharp eyes can tell with some prompting that this is not the color episode.
Sorry about that.


Today in History:
December 24, 1818 -
The classic Christmas carol, Silent Night, was first performed on this date.

At St. Nicholas Church in Oberndorff, Austria, Franz Gruber, composed on his guitar the melody for Silent Night. The music was combined with the words from Joseph Mohr's poem, Stille Nacht.


December 24, 1826 -
On hearing that their Christmas celebrations had to be alcohol-free, several West Point cadets smuggled in a few jugs of whiskey. Their private party got out of hand, and the ensuing melee became known as The "Eggnog Riot".

Shots were fired, and an artillery unit had to be called in to calm things down. Among the participants was future President of the Confederacy Jefferson Davis.

By the 1920's membership in the Ku Klux Klan reaches an astonishing two million.


December 24, 1867 -
This was the first time that the R.H. Macy's department store in New York City remained open until midnight to catch last-minute shoppers.


December 24, 1914 -
World War I was only months old on Christmas Eve 1914 when an extraordinary unofficial truce occurred in many places along the Western Front. "We were all moved and felt quite melancholy," wrote one German soldier, "each of us taken up with his own thoughts of home." German and English troops, often less than one hundred yards from each other, set aside warfare to trade Christmas greetings and sing familiar carols in two languages (If you remember correctly, most of the major players in this war were more than just on a first name basis - they were all related to a minor German prince who happened to be married to his cousin, the Queen of England.)

He thought it would impress his girlfriend - perhaps it did.


December 24, 1968 -
Apollo VIII astronauts read passages from the Old Testament Book of Genesis and transmitting a message to all mankind calling for 'peace on earth', during a Christmas Eve television broadcast. The three astronauts, James A. Lovell, William Anders and Frank Borman (our friend with the messy space suit,) had reached the moon.

They would orbit the moon ten times, paving the way for the first Earthling to walk on the lunar surface some seven months down the road .


December 24, 1985 -
Fidel Castro announced that he has given up cigars on this date.

Santa still leaves him a lump of something (I'm not saying what) in his stocking every Christmas.


You'd better hurry up and finish your shopping before I start explaining how the War of 1812 was resolved by the Treaty of Ghenet on this date in 1814 and yet the Battle of New Orleans took place on January 8, 1815, after the treaty was signed.

Here's a recent uncovered photo of  Dr. Caligari (and his partners in crime) performing another number from his little known Brechtian Cabaret act in the Weimar Republic - Ratet mal, was ist meine Nase? 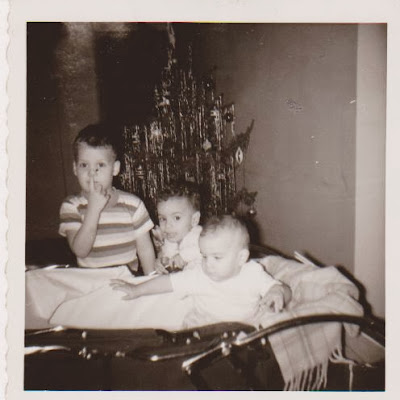 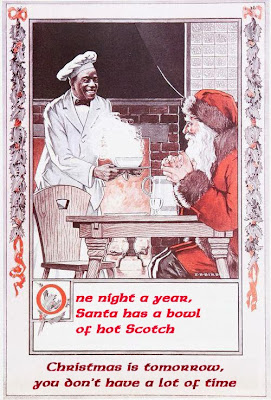