The word of the day that might not come up

I'm not sure there are many of you that are getting ready to saddle up.


We lose an hour of sleep tonight - daylight saving time starts at 2 AM tomorrow morning, so don't forget to turn all those clocks, microwaves, DVD players, etc. ahead. 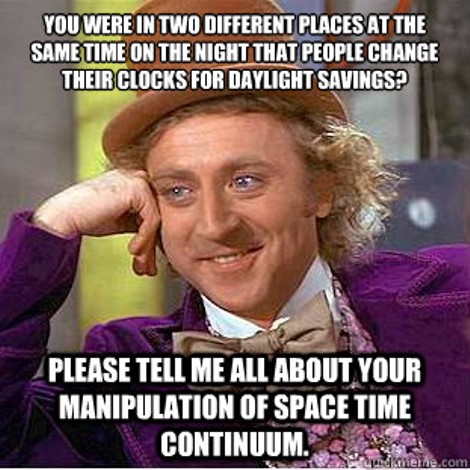 Please do this work yourself: where would you have been an hour earlier tomorrow?

I'm not a big Disney fan (especially Mickey Mouse) but this one is pretty funny. Donald Duck undergoes a major face lift after this cartoon.


March 7, 1962 -
The Alain Resnais' enigmatic masterpiece, L'année dernière à Marienbad (Last Year in Marienbad), opened in the US on this date.

I'll tell you the plot - a man meets a woman at a European spa and tries to convince her (and himself) that they met one year ago. According to screenwriter Alain Robbe-Grillet, the movie is a pure construction, without a frame of reference outside of its own existence - just watch it.

In real life the museum's paintings were indeed loaded into a train for shipment to Germany, but fortunately, the elaborate deception seen in the movie was not really required. The train was merely routed onto a ring railway and circled around and around Paris until the Allies arrived.

The stars somehow aligned for him and both My Beautiful Laundrette and A Room With A View, opened in NYC on this date.

Lewis was relatively unknown in the US at that time and critics raved about how great the range of his talent was to play such vastly different characters. (It's called acting)


Today in History:
March 7, 1923 -
The popular poem by Robert Frost, Stopping by the Woods on a Snowy Evening, was first published on this day in The New Republic.

It was an instant classic, and many a student can recite the lines:


March 7, 1933 -
Charles Darrow, for some reason claims that he invented The Monopoly board game on this date. Thank your rich Uncle Pennybags.


(Quite truthfully, the history of the Monopoly game is so complicated, for legal reasons, just go with this date, don't ask about Elizabeth Magie's 'The Landlord Game' and her patent of March 23, 1903.)


March 7, 1945 -
Gen. George Patton urinated in the Rhine after the U.S. Third Army takes the bridge at Remagen on this date.

So remember, you can't slap a soldier for cowardice but you can piss in your enemy's river.

It was so well received that the musical was restaged again live for television on January 9, 1956. Both of these broadcasts were produced in color, but only black-and-white kinescope recordings survive.


March 7, 1988 -
Transvestite actress Divine (Harris Glenn Milstead,) who appeared in several John Waters films, died from sleep apnea on this date. Divine was about to join the cast of Married with Children when she unexpected stopped breathing.

The producers of Married With Children sent flowers to the funeral, along with a humorous card that read, If you didn't want to do the show, you could have just SAID something!


The Crazy Mixed-Up Russian Revolution
March 7, 1917 -
Russia's 1917 February Revolution began on March 7, which was then the middle of February, in the city of St. Petersburg, which was then Petrograd, in what was then Russia, but would soon be the Soviet Union.

Tsar (or Czar) Nicholas II of the Romanov (or Romanoff) line had been away from St. Petersburg (or Petrograd) most of the winter, leading his army against the German Empire's Eastern Front (or Russia's Western Front).

Russia's peasants and workers had become exhausted by the war and its attendant famine and were exasperated by the Tsarina's indifference to their suffering. They were furious with the government, which had become two governments and therefore twice as bad. And they were tired of all this nonsense about March being February, St. Petersburg being Petrograd, the Czar being Tsar, and all those crazy, mixed-up fronts.

In short, the peasants were revolting. And so these poor bastards began a series of riots and strikes that eventually led to what is now known as the February Revolution.

With her usual delicate touch, the Tsarina tried to assuage the rioters by having them shot, but her soldiers refused to fire on the crowds. She therefore ordered the soldiers to shoot themselves and was disobeyed again.

It was a bleak moment for the House of Romanov, which like most monarchies had endured through the centuries largely as a result of its soldiers' willingness to shoot people.

One Year later:
On March 7, 1918 the Bolsheviks changed their name to the Russian Communist Party.

Bolsheviks is Russian for majority, as opposed to Mensheviks, which means minority. The Mensheviks, however, were in fact the majority party in 1918, and the Bolsheviks the minority, so the name change helped ease the work of journalists, who had become so confused they'd begun writing stories about children and ducks.


March 7, 1965 -
Protesting the shooting death of  Jimmie Lee Jackson (a 26-year-old church deacon from Marion,) by an Alabama State Trooper, a group of more than 600 Civil Rights marchers trying to get to the state capitol in Montgomery, was broken up in Selma, Alabama, on this date 50 years ago today.

Coverage of the riot, which was broken up by state troopers with teargas and whips, was one of the first to get major coverage in the Civil Rights movement and put the national spotlight on the issue.