December and all that other stuff

World AIDS Day, observed December 1 each year, is dedicated to raising awareness of the AIDS pandemic caused by the spread of HIV infection. In the United States, approximately 56,000 persons become infected with HIV each year. (Remember to Light a candle)

During 2008, some 2.7 million people became infected with the human immunodeficiency virus (HIV), which causes AIDS. 2008 also saw more than 2 million deaths from AIDS - a high global total, despite antiretroviral (ARV) therapy, which reduced AIDS-related deaths among those who received it. The concept of a World AIDS Day originated at the 1988 World Summit of Ministers of Health on Programmes for AIDS Prevention. Since then, it has been taken up by governments, international organizations and charities around the world.

Hanukkah starts tonight - get the loose pants out.

And kids, know when a simple game becomes an addiction - please no actual gambling while playing with your dreidels. Gamblers Anonymous (718) 352-1671

But the Roman statesman Julius Caesar added two days to December, which made it 31 days. You get to do that if you are dictator to the known World.

In the northern half of the world, Winter begins in December. Winter does not begin until December 21 or 22, and most of December is usually warmer than other winter months.

The latter part of December has long been a holiday season. Christians celebrate Christmas Day, as the birthday of Jesus Christ and not my nephew Frankie, as it is mistakenly believed in my sister's home.

In the Northern Hemisphere, most birds and elderly folks have gone to warmer climates. But many animals are active. Mink, ermine, beavers, and foxes grow beautiful coats of fur. Nature finishes preparing for the long winter ahead. Many people make feeding places for birds and squirrels.


Today in History - December 1, 1903 -
The first Western film, directed by Edwin S. Porter, The Great Train Robbery, was released on this date.

Prior to Porter’s landmark movie, moving pictures were non-narrative, with one long shot recording an actual event. The Great Train Robbery developed multiple plot lines simultaneously by cutting and splicing film. Moviegoers screamed when the scene of an outlaw shooting directly into the camera was shown.

Bingo was invented by Edwin S. Lowe, on this date.

Uncle Joe sure knows how to hold a grudge.


December 1, 1935 -
Allen Stewart Konigsberg, writer and film director was born on this date, and immediately regretted the entire incident, complaining that he didn't know his mother well enough to be involved in such an 'intimate experience" as birth.

Thanks for the eggs.

It's nice to have a hobby.

(Keep looking, you can find him.)


On December 1, 1955, Rosa Parks refused to sit on the back of a bus in Montgomery, Alabama, in violation of the democratic and egalitarian laws that so many Americans had fought so hard to preserve. 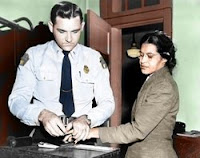 This resulted in a period of national reflection upon the meaning of the phrase "all men are created equal," which no longer appeared so self-evident. After considerable debate, the U.S. judicial system eventually made the novel decision that "all men" might be interpreted to mean "all men," and America has been a paragon of peaceful coexistence ever since.