If you are mid-fast today, keep pushing through. God appreciated your effort.


The celebrations of Cephalopod Awareness Day keep rolling along - Today we celebrate Nautilus Night, highlighting all the lesser-known extant cephalopods -


A wiser man than I once said - The clever cat eats cheese and breathes down rat holes with baited breath, which leads us to the fact that today is also Moldy Cheese day.

Am I really going to encourage you to eat rotting cheese, (while bleu, camembert, gorgonzola, maytag blue, roquefort, brie, and stilton are perfectly fine,) I also never I'd be living during the age of Trump.

Serge Gainsbourg's song Je T'Aime Moi Non Plus, was considered one of the first 'orgasm records' and the BBC was not able to cope with such explicit lyrics and Jane Birkin's moans and groans.


October 9, 1978 -
Jacques Brel was certainly not alive and well and living in Paris on this date.

Mr. Brel, the Belgian-born French cabaret singer, had died earlier in the day.

Joan Rivers gave up her long-running guest host position on The Tonight Show Starring Johnny Carson for her short-lived stint as host of this series, which was the Fox network's first late-night talk show.


Today in History:
October 9, 28 BC -
Caesar Augustus dedicated the Temple of Apollo to his patron god Apollo, on the Palatine Hill in Rome, on this date.

Not to upset those of you with delicate natures, but just think of having the lubricant concession with the amount of unnatural act committed that night.


October 9, 1000 -
Leif Ericson discovered Vinland and became the first known European to walk in North America, on this date (or not). In 1964, the United States Congress authorized and requested the President to proclaim October 9 of each year as Leif Erikson Day. 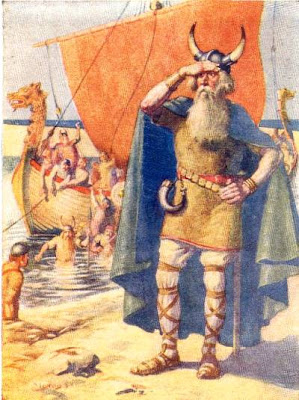 The day after Leif Ericson Day in 1965, Yale University astonished the world with its Vinland Map, a 1440 transcription of a map believed to have been originally drawn by Ericson himself (or possibly Eriksson, but certainly not Eiriksson) around 1000 A.D., and which appeared to depict parts of Canada. Just a few years ago, more evidence supporting the authenticity of the map was revealed, lending further support to the conclusion that there were Vikings in North America five centuries before Columbus soiled his first diaper.

But this is also deeply troubling, because there was probably someone here before those original Caucasians.

In the interests of fairness, I enthusiastically endorses the endowment of every American with their own casino.

Once again, because of the implementation of the Gregorian calendar this day does not exist in this year in Italy, Poland, Portugal and Spain. This leads to more mass confusion and most of the populace just go back to bed and give up belief in calendars.


On this date in 1776 a group of Spanish Missionaries, led by Father Francisco Palou founded Mission San Francisco de Asis in what is today San Francisco. 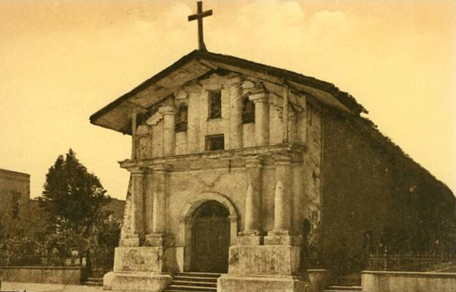 Their arrival displaced a small Native American population and therefore came to be known as the "missionary imposition."

October 9, 1855 -
Isaac Singer was issued a patent (US No. 13,661) for the sewing machine motor, which went on to revolutionize the textile industry. 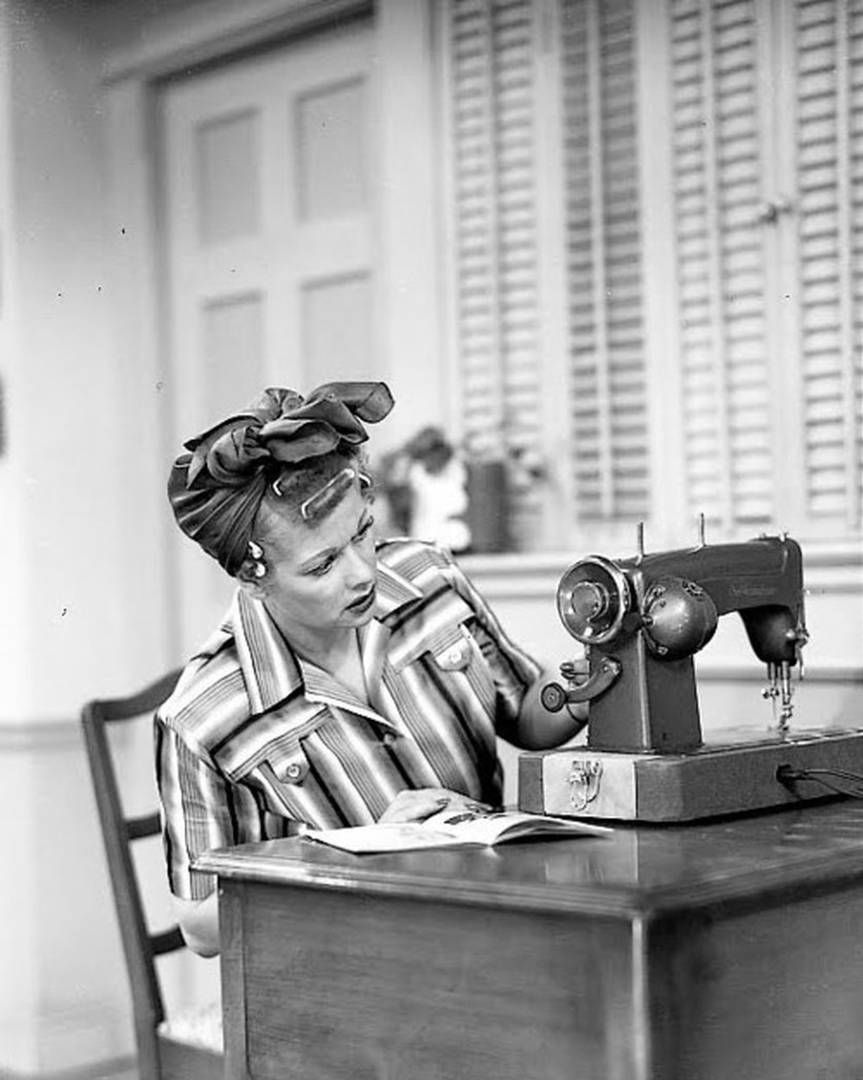 That same year, SINGER becomes the largest selling brand of sewing machines internationally. The SINGER brand is awarded the first prize at the World’s Fair in Paris, France. 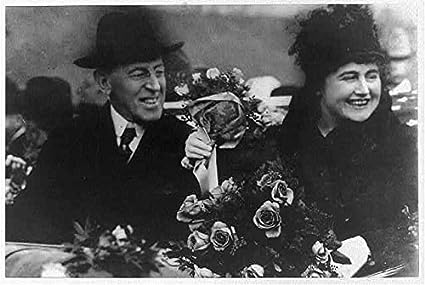 President Woodrow Wilson and his then fiancé, Edith Galt (and soon be the first female U.S. President, but that another story ...) watched game two of the World Series, at Baker Bowl, between Boston and Philadelphia on this date. 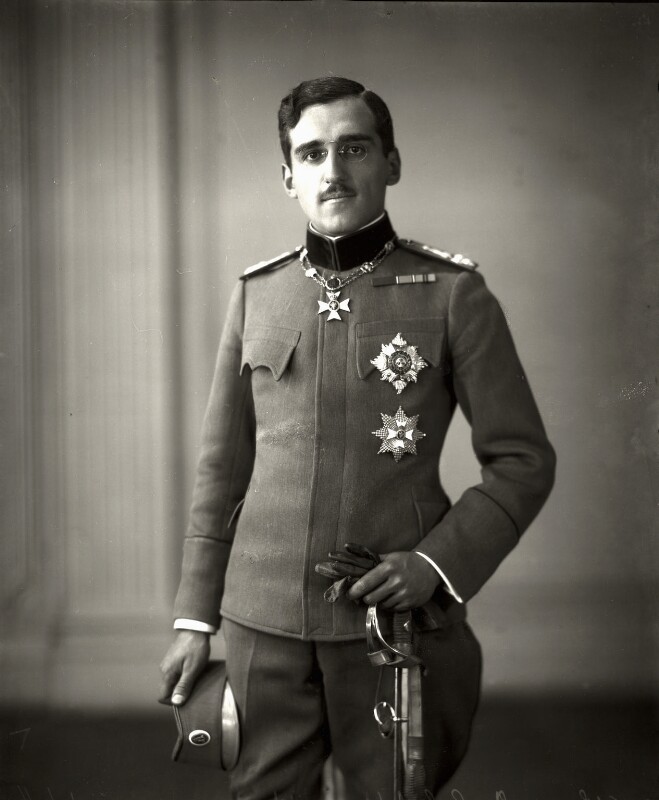 On account of the deaths of three members of his family on a Tuesday, Alexander refused to undertake any public functions on that day. On Tuesday October 9, 1934, however, he had no choice, as he was arriving in Marseille to start a state visit to the Third French Republic, to strengthen the two countries' alliance in the Little Entente. While being driven in a car through the streets along with French Foreign Minister Louis Barthou, a gunman, Vlado Chernozemski, stepped from the street and shot the King and the chauffeur. The Minister was accidentally shot by a French policeman and died later (I hate when that happens.) 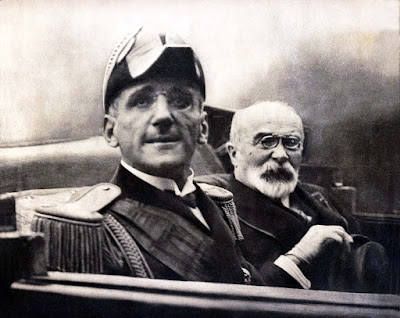 It was one of the first assassinations captured on film; the shooting occurred straight in front of the cameraman, who was only feet away at the time. The cameraman captured not merely the assassination but the immediate aftermath; the body of the chauffeur (who had been killed instantly) became jammed against the brakes of the car, allowing the cameraman to continue filming from within inches of the King for a number of minutes afterwards. 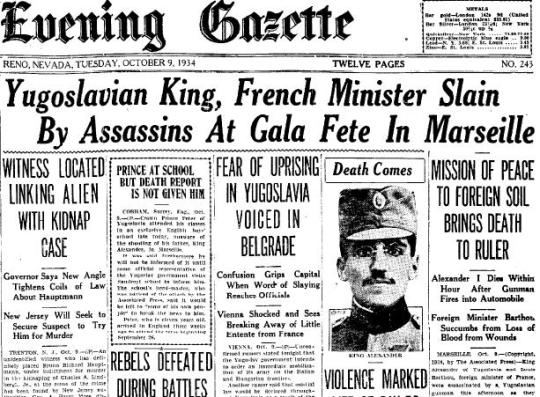 The assassin, Vlado Chernozemski - driver of the leader of the Internal Macedonian Revolutionary Organization, Ivan Mihailov and an experienced marksman - was cut down by the sword of a mounted French policeman, then beaten by the crowd. By the time he was removed from the scene, he was already a bloody pulp.

The film record of Alexander I's assassination remains one of the most historic pieces of newsreel in existence (film footage), alongside the film of Tsar Nicholas II of Russia's coronation, the funerals of Queen Victoria of the United Kingdom, and Emperor Franz Josef of Austria, and the assassination of John F. Kennedy.


October 9, 1958 -
Pope Pius XII suffered a most 'unfortunate' accident after his demise. The Pope died during an exceptionally hot summer.

When Pius died, Professor Riccardo Galeazzi-Lisi who was treating the ill pontiff (Galeazzi-Lisi was not a doctor but an optometrist) turned embalmer, trying to hide his crimes. 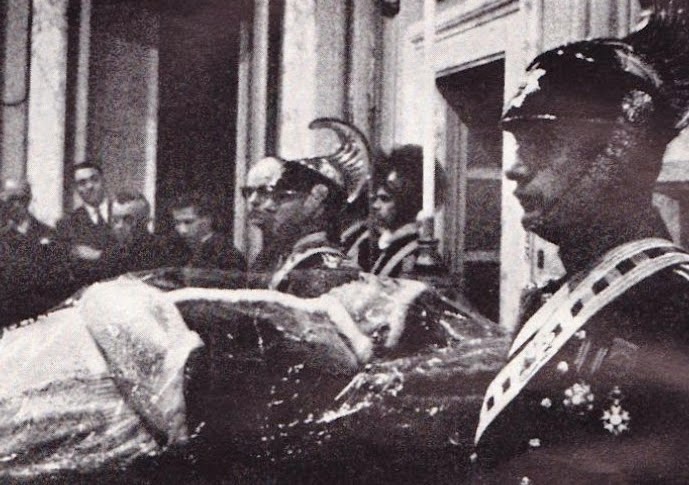 Rather than slow the process of decay, the doctor-mortician's self-made technique sped it up, leading the Holy Father's corpse to disintegrate rapidly, turning purple, with the corpse's nose falling off. The stench caused by the decay was such that guards had to be rotated every 15 minutes, otherwise they would collapse. The condition of the body became so bad that the remains were secretly removed at one point for further treatments before being returned in the morning.


October 9, 1967 -
On October 8th, Che Guevara was captured while leading a detachment with Simeon Cuba Sarabia in Bolivia. According to some soldiers present at the capture, during the skirmish as they approached Guevara, he allegedly shouted, "Do not shoot! I am Che Guevara and worth more to you alive than dead." Upon hearing of Guevara's capture, news was relayed to CIA headquarters at Langley, Virginia, via CIA stations in various South American nations. 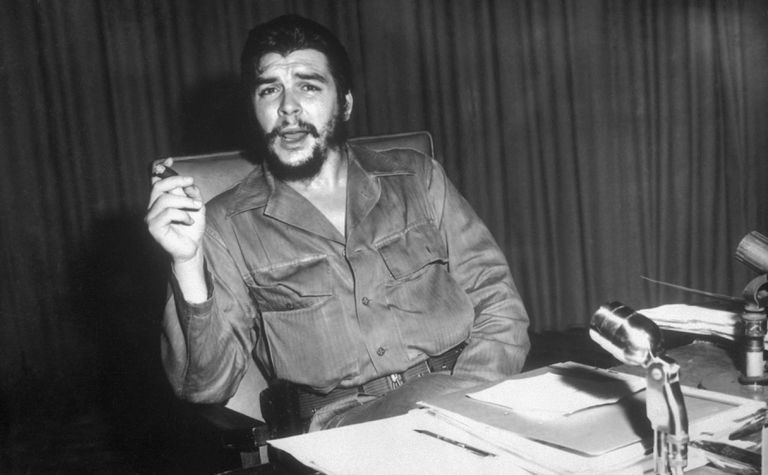 The President of Bolivia, René Barrientos promptly ordered his execution upon being informed of his capture. Guevara was taken to a dilapidated schoolhouse in the nearby village of La Higuera where he was held overnight. Early the next afternoon he was executed. The executioner was Mario Ter‡n, a Sergeant in the Bolivian army who had drawn a short straw after arguments over who got the honor of killing Guevara broke out among the soldiers. To make the bullet wounds appear consistent with the official story sold to the public, Felix Rodriguez, the CIA asset, ordered the soldier who pulled the trigger to aim carefully to make it appear that Che had been killed in action during a clash with the Bolivian army, and thus to help cover up the official secret assassination. Guevara received multiple shots to the legs, so as to avoid maiming his face for identification purposes and simulate combat wounds in an attempt to conceal his ex judicial execution.

Che Guevara had some last words before his death; he allegedly said to his executioner, "I know you are here to kill me. Shoot, coward, you are only going to kill a man." His body was lashed to the landing skids of a helicopter and flown to neighboring Vallegrande where it was laid out on a laundry tub in the local hospital and displayed to the press.

After the execution, Rodriguez took several personal items of Guevara's including a Rolex watch, often proudly showing them to reporters during the ensuing years. Today, some of these belongings, including his flashlight, are on display at the CIA headquarters. After a military doctor surgically amputated his hands, Bolivian army officers transferred Guevara's cadaver to an undisclosed location and refused to reveal whether his remains had been buried or cremated.

And that boys and girls, was your US dollars at work in 1967.


October 9, 1973 -
All this new stuff they call rock ’n’ roll, why, I’ve been playing that for years now… Ninety percent of rock-and-roll artists came out of the church, their foundation is the church.


October 9, 1974 -
Obscure German businessman Oskar Schindler, passed away at the age of 66 in Frankfurt, Germany on this date. A member of the Nazi Party, he ran an enamel-works factory in Krakaw during the German occupation of Poland, employing workers from the nearby Jewish ghetto. When the ghetto was liquidated, he persuaded Nazi officials to allow the transfer of his workers to the Plaszow labor camp, thus saving them from deportation to the death camps.

In 1944, all Jews at Plaszow were sent to Auschwitz, but Schindler, at great risk to himself, bribed officials into allowing him to keep his workers and set up a factory in a safer location in occupied Czechoslovakia. By the war's end, he was penniless, but he had saved 1,200 Jews. In 1962, he was declared a Righteous Gentile by Yad Vashem, Israel's official agency for remembering the Holocaust. According to his wishes, he was buried in Israel at the Catholic cemetery on Mount Zion.

Central Park's Strawberry Fields was dedicated on John Lennon's birthday, by Yoko Ono, who had underwritten the project, on this date.


There are 83 days left in the year

(So therefore there are 77 days until Christmas.)